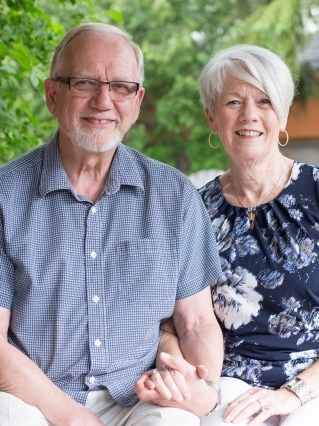 Joe graduated from Royal Military College in Kingston, Ontario with a Chemical Engineering degree. He served in the Armed Forces and flew jets and helicopters for 6 years. Next, he served for seven years as an airline pilot.  Joe had a dramatic conversion experience in Amsterdam, Holland through reading a book given to him by his mother-in-law. Several years later, he experienced the call of God to enter into the ordained ministry, serving 27 years in Senior Pastor positions. His last 13 years have been involved in Israel ministry.

Joe married Vicki when he graduated from university in 1967. Together, they have served as a team in their various ministry endeavours, including their involvement as coordinators and trainers in FFI. They have three children and seven grandchildren, all following the Lord.

Joe has a passion for teaching and preaching; he presently serves in leadership at RETURN Ministries in Bright, Ontario, in the teaching and pastoral care role. RETURN is an Israel based ministry devoted to training Christians to serve in the prophetical calling of bringing Jews back to Israel (Aliyah).

Joe and Vicki reside in London, Ontario, and are presently involved in several other ministries, as well: Bible Study leaders at weekly Bible studies; mentors to younger Christians; lead intercessors for Canada and Israel; and prophetic team members at their local church. Life is full!